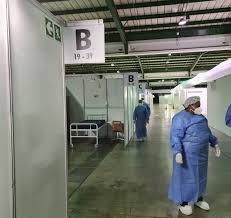 According to the Gauteng department of health, continuous training is being provided to staff on the management of aggressive mental healthcare patients, following numerous documented attacks on the healthcare workers.

Gauteng health spokesperson Kwara Kekana said for the period between January 2020 to November 2021, at least 41 attack incidents on staff by mental healthcare patients were recorded.

“These attacks vary, but in the main, revolve around nurses, doctors and security guards being either assaulted or bitten by mental healthcare patients,” said Kekana.

In one incident, a patient at a clinic in the Sedibeng health district pulled a light bulb from the ceiling and attacked staff.

Kekana said the various measures that have been put in place to reduce attacks on staff include sedating the mental patients at casualty on arrival at a facility where necessary.

“In addition, the department has placed security personnel at casualty department to assist with psychiatric patients. The department has reported all the cases as injury on duty and referred them to the Employee Assistance Programme for further management.”