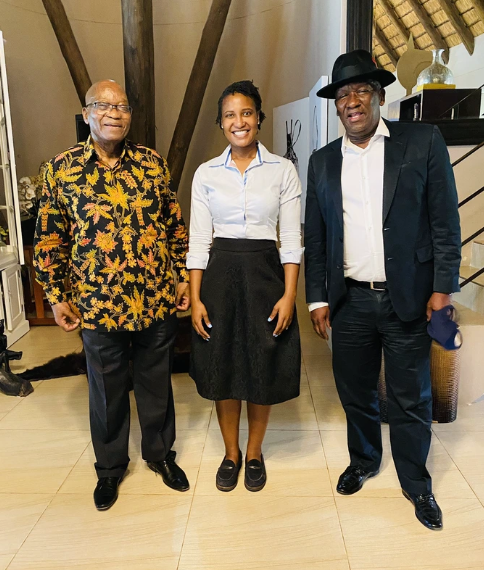 Dudu Zuma-Sambudla mentioned two things that should be addressed and these include release of CR7 bank statements and investigation of the judiciary.

Jacob Zuma’s daughter attached a document with some names of judges allegedly paid by CR17 campaign.

Judge Sullet according to the document posted by Zuma’s daughter, is the highest paid judge and it’s alleged that one of her captured judgment was when she defended Gordhan Pravin and reffered to the Public Protector Busisiwe Mkhwebane’s remedial actions as “nonsensical.”

Dudu Zuma-Sambudla called for the investigation of judges.

“Investigate our judiciary and release #CR17BankStatements lets see what Jacob Zuma was talking about,” she said.

Dudu Zuma-Sambudla also reffered to utterances made by Chief Justice Mogoeng Mogoeng that a certain institution approached him and offered him R600 million as bribe and he rejected it and said it’s high time the judiciary should be investigated.

“If a whole CJ can be approached with money, imagine our judges. These claims are very serious and ones Jacob Zuma has made. It’s high time the judiciary is investigated and #CR17BankStatements made public, then we can talk about the real state capture,” she said.

It has been a long time coming for the former president of South Africa Jacob Zuma and his case against the state enquiry commission. The whole country knows that for the past … END_OF_DOCUMENT_TOKEN_TO_BE_REPLACED

Thulasizwe Siphiwe Dambuza, known professionally as Lasizwe has taken to social media to express his heart break as he was dumped barely after 6 months in the relationship. The LGBTQ … END_OF_DOCUMENT_TOKEN_TO_BE_REPLACED

AKA posted a hand of his girlfriend on Twitter with an engagement ring on her finger and fans could not hold themselves and comment. Different comments were written others congratulating AKA for … END_OF_DOCUMENT_TOKEN_TO_BE_REPLACED

Apparently, some of DJ Fresh’s former victims have children as a result of his sexual abuse (rape). Someone just came forward saying they are willing to do a DNA test. … END_OF_DOCUMENT_TOKEN_TO_BE_REPLACED

Dudu Zuma-Sambudla mentioned two things that should be addressed and these include release of CR7 bank statements and investigation of the judiciary. Jacob Zuma’s daughter attached a document with some … END_OF_DOCUMENT_TOKEN_TO_BE_REPLACED