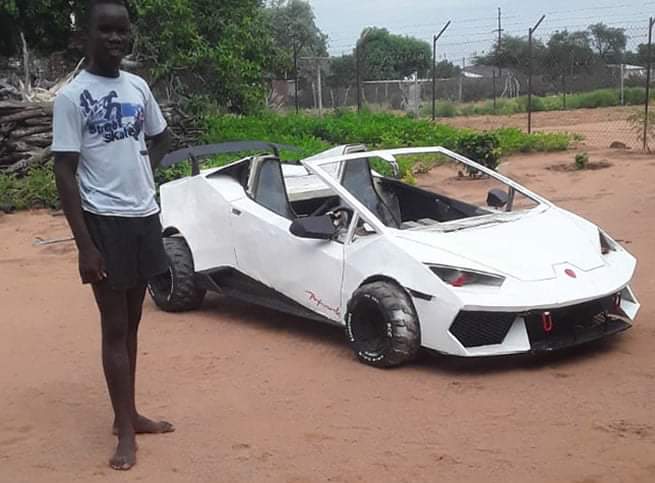 Mukundi Malovhele was never any good at maths and science, but had a natural knack with engineering things with his hands.

The shy 21-year-old has built a car inspired by his love for luxury car brand Lamborghini by using scrap materials and old car parts. He said because he cannot afford a luxury car he decided to try and build himself one.

“I’ve always loved the Lamborghini when I saw it on TV, so I decided to make one inspired by it because I can’t afford to buy it,” he said.

Malovhele, who resides at Tshipise Tshasagole-Niani village in Venda, said he started collecting scrap materials from old cars to build his own car. Inspired by his years of building wire cars, he decided to give it a go in 2017.

“I used to make wire cars when I was younger; this is a passion that has been within me for a long time,” he said.

The son of a tomato and watermelon farmer, Malovhele said lack of money has hindered him from completing it. “My father sometimes spares me some money to buy some parts, but what I really need is a small engine,” he said.

While waiting for his matric results, he helps his father work the land and sell their produce to other villagers while working on his designs.

“I want to become a mechanic and fix cars, but I also want to make my own car model because this is what I understand. My dream is to go to a technical college that will help me work on my skills.”

However, neighbour Justice Mbedzi said people did not take him seriously when he started out. “It’s amazing because now people want to come to his house all the time to see the car,” said Mbedzi.

Thulasizwe Siphiwe Dambuza, known professionally as Lasizwe has taken to social media to express his heart break as he was dumped barely after 6 months in the relationship. The LGBTQ … END_OF_DOCUMENT_TOKEN_TO_BE_REPLACED

AKA posted a hand of his girlfriend on Twitter with an engagement ring on her finger and fans could not hold themselves and comment. Different comments were written others congratulating AKA for … END_OF_DOCUMENT_TOKEN_TO_BE_REPLACED

Apparently, some of DJ Fresh’s former victims have children as a result of his sexual abuse (rape). Someone just came forward saying they are willing to do a DNA test. … END_OF_DOCUMENT_TOKEN_TO_BE_REPLACED

Dudu Zuma-Sambudla mentioned two things that should be addressed and these include release of CR7 bank statements and investigation of the judiciary. Jacob Zuma’s daughter attached a document with some … END_OF_DOCUMENT_TOKEN_TO_BE_REPLACED