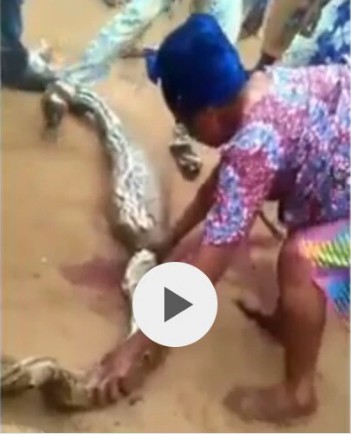 South African women are known to be brave and fearless that they can do the improbable things anytime. Litlle wonder that they are the most sort after, because of their bravey and resilence in life.

Just like many other African tribes, Zulu is known to be warriors who hardly lose in battle no matter the numbers of their rival. They don’t give up easily to adversely.

This was in reaction to a trending video of a brave young woman who was seen single-handedly chasing a large Python that swallowed her goat. According to the clip, it’s obvious that the big snake made its a way through to her local farm made away with one the goats.

However, upon seeing it, she rushed inside and brought a sharp machete, cut the head off before locals surrounded the area in amazement. As if that is not enough, the fearless woman who have Zulu attribute, slashed the stomach upon and brought out the innocent mammal, unfortunately, it’s already dead.

Here are some of the pictures from the video as was shared online;

What’s your take on this?

Also don’t forget to Like, Share and Follow for more update on Public Safety, Crime, Entertainment, Health, Education, Sports and all the Breaking News across South Africa and beyond.

Thulasizwe Siphiwe Dambuza, known professionally as Lasizwe has taken to social media to express his heart break as he was dumped barely after 6 months in the relationship. The LGBTQ … END_OF_DOCUMENT_TOKEN_TO_BE_REPLACED

AKA posted a hand of his girlfriend on Twitter with an engagement ring on her finger and fans could not hold themselves and comment. Different comments were written others congratulating AKA for … END_OF_DOCUMENT_TOKEN_TO_BE_REPLACED

Apparently, some of DJ Fresh’s former victims have children as a result of his sexual abuse (rape). Someone just came forward saying they are willing to do a DNA test. … END_OF_DOCUMENT_TOKEN_TO_BE_REPLACED

Dudu Zuma-Sambudla mentioned two things that should be addressed and these include release of CR7 bank statements and investigation of the judiciary. Jacob Zuma’s daughter attached a document with some … END_OF_DOCUMENT_TOKEN_TO_BE_REPLACED