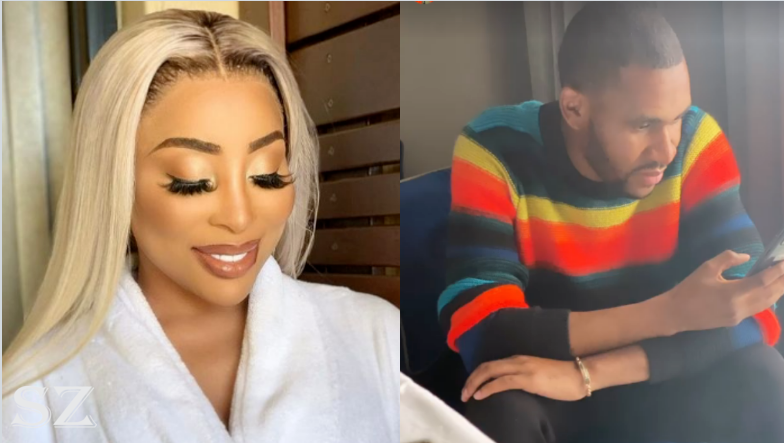 It was alleged that ‘Ndege Boy’ was not working alone, his fellow conspirators were named as Tatenda Mandimudza and Njabulo Ndebele when he was just 25 years old, and all are still at large. The police reports state that the trio acted as employees of Dream Air Company which did not exist and convinced the micro-financier by using forged documents to deposit the amount on Kudzai Mushonga’s CBZ account.

It seems Khanyi Mbau did not know of her current bae’s past transgressions and posted Kudzai on her Facebook page revealing to her fans the new man in her life.

However, the two are just a good match for each other as they are both plagued by controversy and her dating someone like Kudzai does not come as a shock as her choice of lovers over the past years have been questionable. She has been accused of being a gold-digger and dating an old man for money but this time she took it a few decades back and went for a younger man probably in the belief that he was “The youngest Zimbabwean to ever own an airline”.

It is believed that ‘Ndege Boy’was believed to be the first Zimbabwean to own an airline back in 2016 and the money he used to buy it was acquired from his fraudulent activities.

Zimbabwean authority has not issued any statement regarding the siting of Kudzai, but we wait patiently how this saga will unfold.

It has been a long time coming for the former president of South Africa Jacob Zuma and his case against the state enquiry commission. The whole country knows that for the past … END_OF_DOCUMENT_TOKEN_TO_BE_REPLACED

Thulasizwe Siphiwe Dambuza, known professionally as Lasizwe has taken to social media to express his heart break as he was dumped barely after 6 months in the relationship. The LGBTQ … END_OF_DOCUMENT_TOKEN_TO_BE_REPLACED

AKA posted a hand of his girlfriend on Twitter with an engagement ring on her finger and fans could not hold themselves and comment. Different comments were written others congratulating AKA for … END_OF_DOCUMENT_TOKEN_TO_BE_REPLACED

Apparently, some of DJ Fresh’s former victims have children as a result of his sexual abuse (rape). Someone just came forward saying they are willing to do a DNA test. … END_OF_DOCUMENT_TOKEN_TO_BE_REPLACED

Dudu Zuma-Sambudla mentioned two things that should be addressed and these include release of CR7 bank statements and investigation of the judiciary. Jacob Zuma’s daughter attached a document with some … END_OF_DOCUMENT_TOKEN_TO_BE_REPLACED